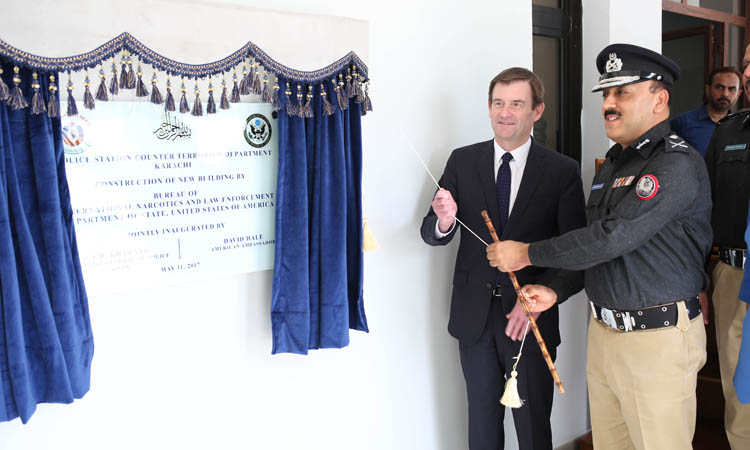 Karachi:  Joined by the Inspector General of Sindh Police, A. D. Khawaja, and the Additional Inspector General of the Counter Terrorism Department, Dr. Sanaullah Abbasi, American Ambassador David Hale underscored the U.S. commitment to the fight against terrorism at the inauguration of the Counter Terrorism Department building (CTD).

On November 11, 2010, a car bomb leveled the CTD Building, killing 21 and injuring more than 400.  America has contributed 24 million rupees through the State Department’s Bureau of International Narcotics and Law Enforcement Affairs to help rebuild the facility so that it can again be occupied by Sindh Police counter terrorism investigators.

“Today we mark the resolve of Pakistan and the United States to overcome acts of terrorism as we inaugurate this new Counter Terrorism Department building.  We are proud to have contributed to the new facility, and glad that it will support the Sindh Police counter terrorism efforts,” said Ambassador Hale.

Ambassador Hale lauded the efforts of Sindh Inspector General of Police A. D. Khawaja and his team to modernize training, develop closer community relations, and enhance security towards a goal of a peaceful and safer Sindh.

The Bureau of International Narcotics and Law Enforcement Affairs works in more than 90 countries to help countries combat crime and corruption, counter drug-related crime, improve police institutions, and promote laws and court systems that are fair and accountable.  Find out more about INL at:  http://www.state.gov/j/inl/.