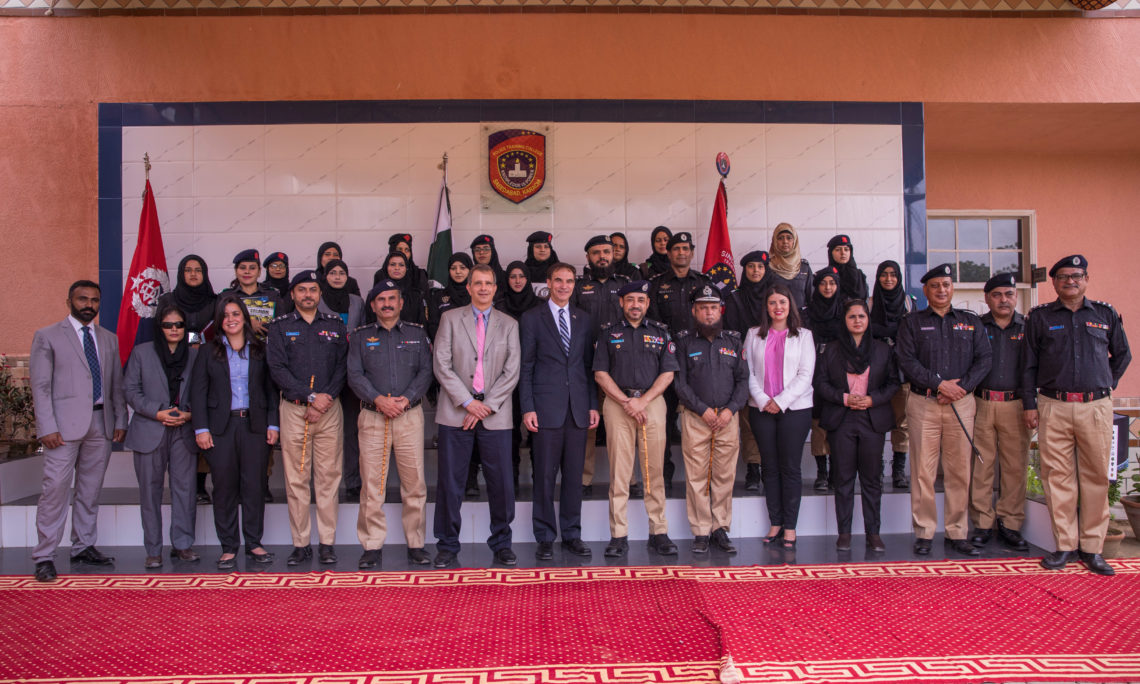 Karachi – In support of the United States’ ongoing commitment to the capacity building of Pakistan’s law enforcement organizations, Ambassador Paul W. Jones toured the Saeedabad Police Training College today with Inspector General of Sindh Police Dr. Syed Kaleem Imam.  Ambassador Jones observed the training of police officers on material developed under the Curriculum Development Program, saw a demonstration of firearms simulators, and viewed the site of the planned construction of barracks for women police officers.  These programs are made possible by over 856 million rupees ($5.35 million) in funding from the United States Government.

Standing with Inspector General Imam, Ambassador Jones said, “The Sindh Police understands its role is not only to fight crime and terrorism, but also to help citizens and create a safe and secure environment for the communities it serves.  The United States is proud to support the Sindh Police’s efforts to develop an efficient and professional police force.  We honor the sacrifices that the men and women of the Sindh police make every day carrying out their vital mission.”

The Curriculum Development Program is a partnership between the Sindh Police and the U.S. Department of State’s Bureau of International Narcotics and Law Enforcement (INL) that is developing local training curriculum by Pakistani police for Pakistani police; developing master trainers; and incorporating the new modules at all Sindh Police training institutions.  Over 85,000 police officers have been trained to date through the program.  In 2018, INL donated 30 firearms simulators to improve the capacity of the Sindh Police’s training institutions to deliver safe and proper firearms training.  In support of the Sindh Police’s efforts to recruit more women into its ranks, INL is funding the construction of women’s barracks at Saeedabad and Shahdadpur Police Training Colleges.

The United States Department of State’s Bureau of International Narcotics and Law Enforcement Affairs works in more than 90 countries to help countries combat crime and corruption, counter drug-related offences, improve police institutions, and promote laws and court systems that are fair and accountable.  Find out more about INL at: http://www.state.gov/j/inl/