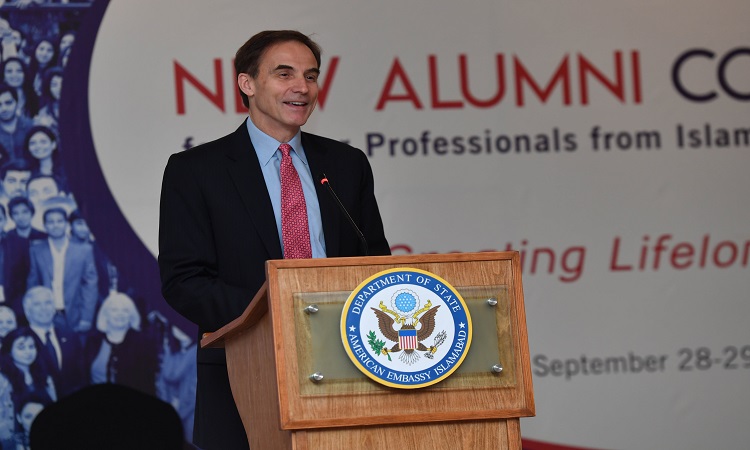 Islamabad, September 30, 2018 – Under the theme “Creating Lifelong Partnerships,” recently returned participants of the U.S. Mission’s professional-level exchange programs gathered for a New Alumni Conference in Islamabad on Saturday.  The conference, hosted by the Pakistan-U.S. Alumni Network (PUAN), introduced over 120 exchange program alumni from across Pakistan to other U.S. Mission programs which will support their ongoing professional development.

Ambassador Paul Jones, U.S. Chargé d’Affaires a.i. and Federal Minister for Federal Education and Professional Training and Minister for National History and Literary Heritage Shafqat Mahmood delivered the keynote remarks.  Minister Mahmood reflected fondly on the years he spent in the United States participating in academic and professional exchanges. Ambassador Jones highlighted the positive impact of U.S. government-funded exchange programs on the careers of Pakistani students and professionals, as well as on Pakistan-U.S. relations. “This year, we celebrated the 10th anniversary of PUAN, whose mission is to build connections and promote understanding between the people of Pakistan and the United States.  This is a strong foundation of the relationship between our two countries,” he said.

The participants of the conference join a network of over 25,000 alumni of various overseas and in-country exchange programs supported by the United States.  Each year the U.S. government invests more than $40 million in exchange programs for Pakistani citizens to visit and study in the United States.  Over 1,000 Pakistanis participate each year in high school, undergraduate, graduate, and professional U.S.-sponsored exchanges.  Since the alumni network began in 2008, Americans have provided more than 18,000 college scholarships for Pakistani students.

Learn more about PUAN at http://www.pakusalumninetwork.com