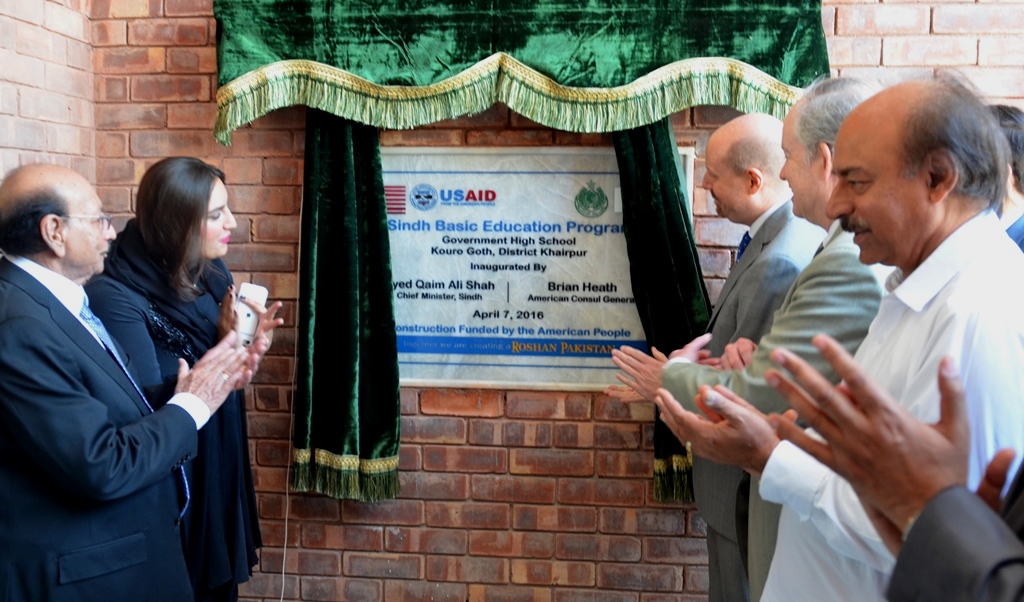 “This school is just one of over 100 state-of-the-art facilities that USAID is constructing in partnership with the Government of Sindh,” said Consul General Heath. “The United States government strongly supports education in Pakistan. I am delighted that this school and others like it will provide young boys and girls with a space to learn and to grow so they can help Pakistan unlock its full potential.”

According to Mission Director of USAID Pakistan John Groarke, “USAID has helped rebuild or renovate more than 1,000 schools over the last five years. In many of the schools, USAID has also supplied computers, science kits, books, and other educational materials.”

The USAID-funded SBEP will construct approximately 106 modern school buildings at a cost of approximately Rs.16 billion over five years in seven districts of northern Sindh and five towns in Karachi. Currently over 50 schools are under construction.  Ambassador Richard Olson and Chief Minister Qaim Ali Shah broke ground at the Kouro Goth school in 2014.  It is the first of four schools that will be completed and handed over this month.

Aside from construction, SBEP aims to increase and sustain student enrollment in primary, middle, and secondary public schools in selected areas of Sindh. The Education and Literacy Department of the Government of Sindh is providing additional support of over Rs.1 billion and the Department has already signed agreements with two organizations to manage four schools in Khairpur and Sukkur districts.

For more information about USAID and its programs in Pakistan, please go to www.usaid.gov/pakistan.