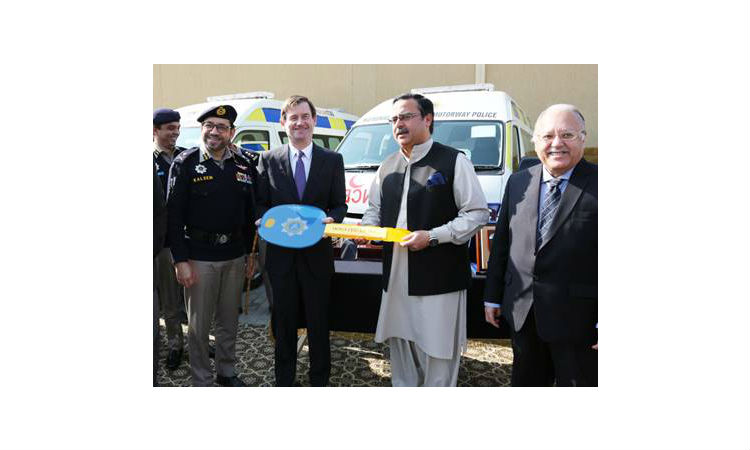 U.S. Ambassador hands over 10 ambulances to the National Highways and Motorway Police representatives.

Ambassador Hale praised NHMP, noting “Since 1997, [NHMP] has built a national reputation for honesty, professionalism, and public service.  [NHMP’s] job is to save lives and help those in need, no matter the dangers – while maintaining the highest ethical and professional standards.”  Ambassador Hale also welcomed NHMP’s efforts to recruit and retain women into its police force, which has nearly four times as many policewomen on its force, as compared to the national average of all police organizations, a testament to NHMP’s culture of professionalism and inclusiveness.

NHMP will place the ambulances in strategic locations throughout Pakistan to respond promptly to emergencies.  Four NHMP officers have also received international certification as master trainers on emergency medical response from the American Embassy’s International Narcotics and Law Enforcement Affairs Section (INL), to train other police officers who are often the first responders to arrive at scenes of serious incidents.

For almost 40 years, the United States and Pakistan have worked to improve citizen security and enhance police capacity across Pakistan.  This cooperation includes providing protective gear for police officers; constructing police training centers and other infrastructure; and training some 18,000 police personnel on investigation, forensics, leadership, and modern policing practices.

The Bureau of International Narcotics and Law Enforcement Affairs, which funded the ambulances, works in more than 90 countries to help combat crime and corruption; counter the narcotics trade; improve police institutions; and promote court systems that are fair and accountable.  Find out more about INL at: http://www.state.gov/j/inl/.