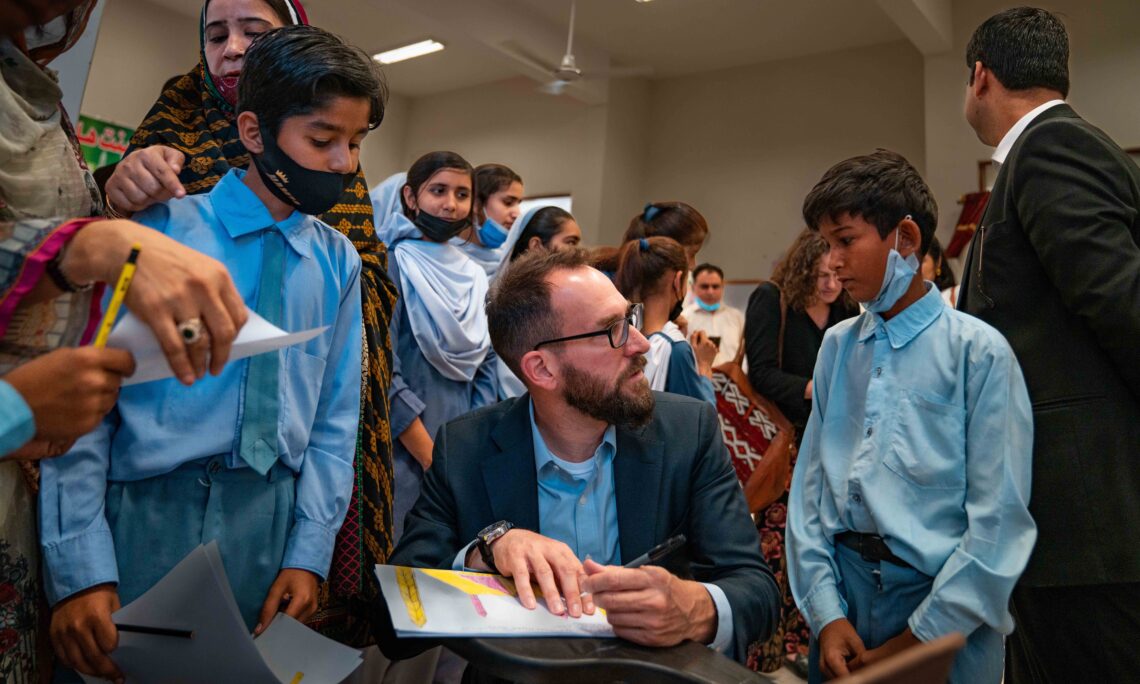 One of the highlights of the Consul General’s visit was his discussion with women entrepreneurs from Sukkur and Larkana who took part in two U.S. Government-funded programs, Academy for Women Entrepreneurs and Qadam Barhao.  The entrepreneurs participating in the programs cited how the programs helped them launch and grow their businesses.  They also discussed some of the challenges and opportunities women face in starting and running a business while also highlighting their desire to empower fellow women entrepreneurs.  While in Khairpur, Consul General Stroh announced the next round of applications for AWE is open until April 15, 2022.  “The Academy for Women Entrepreneurs and Qadam Barhao are examples of the United States’ commitment to further develop women’s entrepreneurship, women’s financial inclusion, and women’s equality,” remarked Consul General Stroh. “Empowering women is a strategic investment in our communities, our countries, and the world.”

million to SBEP to increase educational opportunities for 80,000 Pakistani girls and boys.  To date, 79 of the 106 schools throughout Sindh, including in Khairpur, Larkana, and Sukkur, have been built.

Consul General Stroh joined Sindh Secretary for Culture, Tourism, Antiquities, and Archives Abdul Rahim Soomro and Sachal Sarmast Library Director Ghulam Sarwar Channar for a ribbon cutting to celebrate the re-opening of the newly renovated Lincoln Corner Khairpur.  The Corner is managed in collaboration with the Pakistan American Cultural Center and features state-of-the-art facilities including a reading corner, a computer lab, and a multipurpose room.  Consul General Stroh noted that “Our five Lincoln Corners throughout Sindh strengthen the relationship the United States has with the Pakistani people.  We are particularly proud to re-open the renovated Lincoln Corner Khairpur as part of our celebrations of the 75th anniversary of bilateral relations between Pakistan and the United States.”

The delegation also visited highlights of Sindh’s rich cultural heritage.  Consul General Stroh laid a wreath at the Shah Abdul Latif Bhitai and Odero Lal shrines.  He remarked that the message of Sufi saints for tolerance and coexistence was truly inspiring.  In Larkana, the delegation visited the World Heritage site Mohenjo Daro to show appreciation for the ancient Indus Valley civilization.  Consul General Stroh noted the importance of cultural preservation and explained that “the United States has partnered with Pakistan government institutions to protect Pakistan’s rich heritage through the Ambassadors Fund for Cultural Preservation.  We also welcome musicians, artists, poets, intellectuals, and cultural figures to the Consulate to celebrate both Baloch and Sindh Culture Days.”

During his visit to the region, the Consul General also met with business leaders from the Sukkur Chamber of Commerce, toured the Continental Biscuit Factory, and participated in a roundtable discussion with journalists at the Larkana Press Club.

For more information on U.S. activities to strengthen economic, higher education, and people-to-people ties between the U.S. and Pakistan, please visit: pk.usembassy.gov and follow us at www.facebook.com/karachi/usconsulate or Twitter: @usconsulatekhi