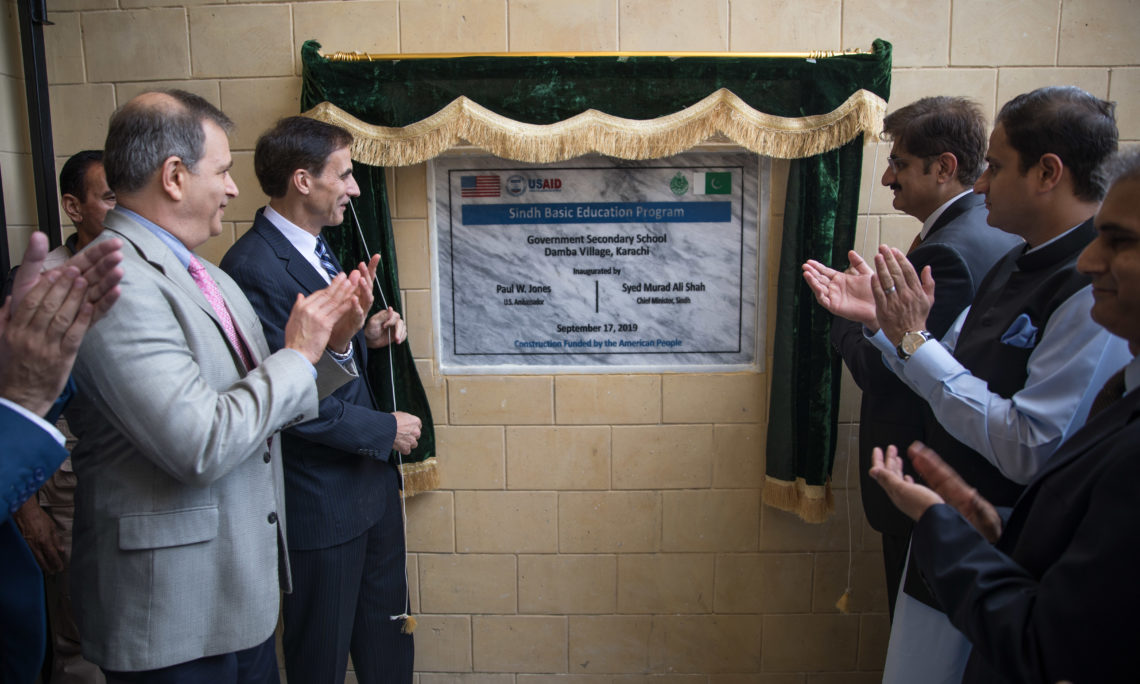 From the American people: A State-of-the-Art School in Karachi

Karachi –Ambassador Paul W. Jones and Chief Minister of Sindh Syed Murad Ali Shah today inaugurated a recently completed school that was constructed with support of the United States Agency for International Development (USAID) at Damba Village in Gadap Town, Karachi. Many local students attended the ceremony and saw where a computer lab, health room and library will be installed to give them a very enhanced learning environment. The modern school is built to high standards so that multiple generations of students will benefit.

“I’m pleased that the partnership between the U.S. Government and Sindh government is showing great results through improved quality of education in public schools in the province,” Ambassador Paul W. Jones said. “True and lasting development starts with education.  The United States and Pakistan share this belief, and that is why we are committed to expanding our cooperation in education.”

Chief Minister Shah expressed his appreciation for the U.S. Government’s strong support in modernizing education in Sindh and the province’s strong and ongoing partnership with USAID.

This new school building was constructed with the support of USAID’s 25 billion Pakistani Rupee ($159.2 million) Sindh Basic Education Program (SBEP), in partnership with the Government of Sindh.  The U.S. Government is supporting construction of 112 modern school buildings in nine districts of Northern Sindh and five towns of Karachi.  Construction of 68 schools has already been completed, while 44 are under various stages of construction.  In addition to constructing schools, SBEP aims to increase and sustain student enrollment in primary, middle, and secondary public schools in select areas of Sindh.  SBEP also supports the government’s reforms in education, community mobilization, public-private partnerships, and improving reading competencies of students.

Consul General Robert Silberstein, Acting USAID Director for Sindh and Balochistan Mark Sorensen, and officials from Sindh government participated in the ceremony along with community elders, teachers, students, and parents.