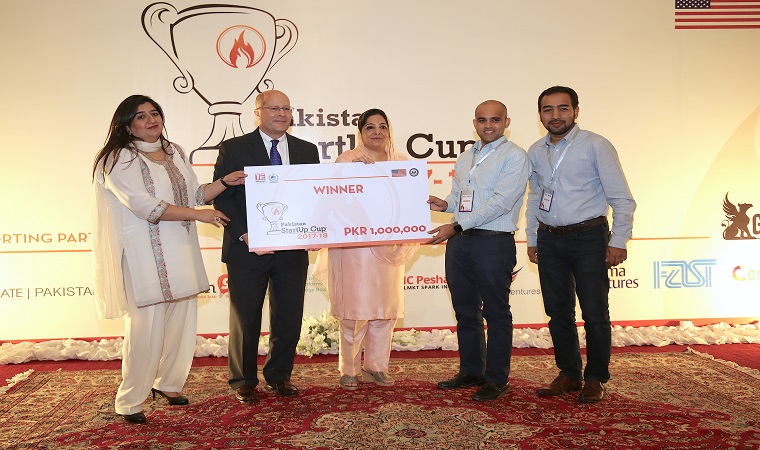 Islamabad, April 22, 2018 – Today, Retailistan, a team from Karachi, beat 17 other teams to take the top prize—1 million rupees—in the 2017-18 StartUp Competition finals, the fourth edition of the American Embassy-funded event.  The United States and Pakistan both benefit when Pakistan’s economy is strong and job prospects are high.  Our investment in the StartUp Cup is just one part of the United States’ robust program to support economic development and spur economic growth in Pakistan.

Retailistan developed a startup plan to change the consumer goods distribution model for small stores through mobile applications and will use the prize to fund its business.  The team is now eligible to participate in the Global StartUp Cup 2018, which will be held in the United States.

Price Oye, a team from Islamabad, finished in second place with its shopping intelligence service that matches consumers with trusted sites, and won 750,000 rupees.  Third place was a tie, with 500,000 rupees going to Lahore-based Eye Automate, who created a wheelchair that is operated by joystick or eye motion, and to Islamabad based Orbit, for its augmented reality educational application.

The American Embassy’s Deputy Chief of Mission, John Hoover, congratulated the finalists.  “We know your businesses can thrive,” he said.  “Nearly 90 percent of last year’s finalists reported that their businesses grew thanks to the mentorship and training they received through StartUp Cup.”

The 2017-18 competition, organized by the Indus Entrepreneurs (TiE) Islamabad Chapter, began last fall.  Applicants submitted more than 2,200 business ideas, and TiE selected 665 teams to participate in StartUp Cup training and activities, including workshops, mentoring opportunities, and judging sessions in Islamabad, Lahore, Karachi, Faisalabad, Peshawar, and Gilgit.  In regional competitions held over the last six months, mentors chose the 18 teams that made it to the Islamabad finals.

Sarah Hashwani, president of TiE Islamabad, said she appreciated the Embassy’s efforts to support economic growth initiatives for start-ups and was impressed by the teams that made it through the rigorous, six-month competition.  “Their business acumen has enhanced our belief that with the right support, start-ups will be an integral part of Pakistan’s economy,” she said.