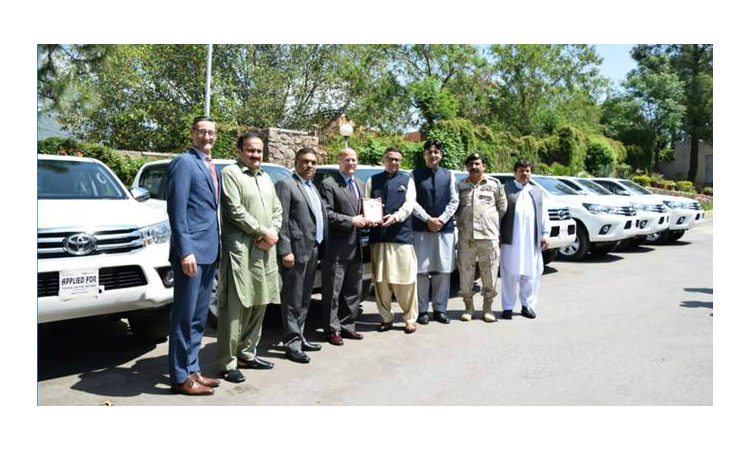 Islamabad, April 19, 2019 – Over the past three decades, Pakistan has reduced poppy cultivation by 87 percent.  The United States is pleased to partner with Pakistan in these ongoing efforts.  In a bid to continue to combat poppy growth, the government of Khyber Pakhtunkhwa (KP) received a contribution of seven new Toyota Hilux pickup trucks from the United States.  The KP government will use the vehicles to implement crop control and related development projects in the districts of Bajaur, Mohmand, and Khyber.  The donation is part of an overall 589 million rupees ($5.1 million) donation to the provincial government to combat poppy cultivation in the merged areas.  Joint Secretary of the Ministry of Narcotics Control Sabino Sikandar Jalal and KP’s Director General Projects, Merged Area Secretariat Khalid Ilyas participated in the event.

The assistance underscores the American government’s long history of partnership with Pakistan in its mission to combat poppy growth.  Over the past 37 years, the United States has invested $60 million in Pakistani efforts to support rural communities in developing economic alternatives to narcotics production; expand legal employment opportunities, especially for women; provide training in sustainable farming techniques; construct roads that extend the writ of the government and provide farm-to-market access; and construct small water supply projects that increase the viability of growing alternative crops.

Deputy Chief of Mission John Hoover said of the project: “We are proud to continue our longstanding partnership with the KP government and former FATA Secretariat, which has resulted in a significant decrease in poppy cultivation, ultimately benefitting the people of KP and the rest of Pakistan.”

The U.S. State Department’s Bureau of International Narcotics and Law Enforcement Affairs (INL), which provided the crop control assistance, works in more than 90 countries to help combat crime and corruption, counter the narcotics trade, improve police institutions, and promote court systems that are fair and accountable.  Find out more about INL at:http://www.state.gov/j/inl/