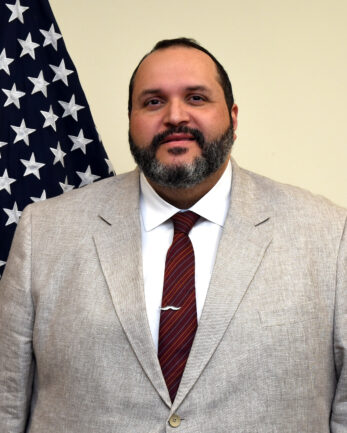 Panfilo Marquez is a career member of the Foreign Service with 23 years of service.  Consul General Marquez most recently served as Deputy Director in the Executive Office of the Bureau of East Asian and Pacific Affairs.  He also previously served as Minister Counselor for Management Affairs in Mission Brazil.  During his time in Brazil, Mr. Marquez served as Acting Deputy Chief of Mission for nearly a year focusing on collaborations in law-enforcement, military to military cooperation, and improved trade relations.  Before Brazil, he also served in Mission France as the Management Officer for the U.S. Missions to France, UNESCO, and the OECD.  Consul General Marquez has also served as Management Officer in Rio de Janeiro, Brazil and Tijuana, Mexico.  Other tours include Paktika, Afghanistan, Costa Rica, and Jamaica.  He has received numerous Superior and Meritorious Honor Awards as well as the Department’s Luther Replogle Award for Management Innovation for his work in Brazil.  He is a native of California and entered the Foreign Service directly from graduate school at UC San Diego where he earned a Master’s in Pacific and International Affairs.  He speaks Spanish, French and Portuguese.