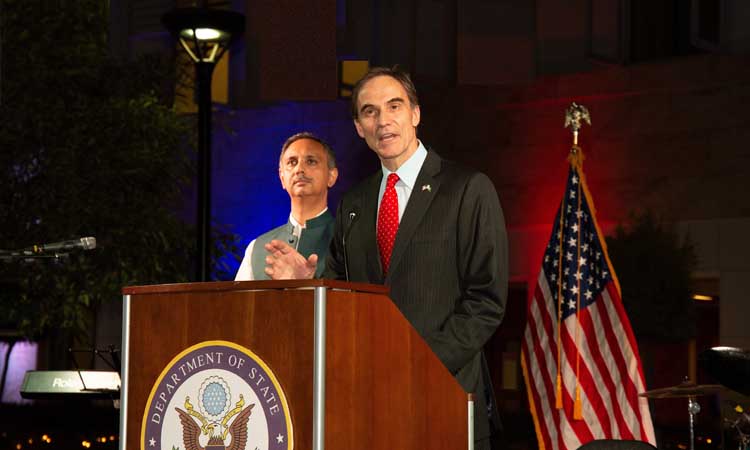 Islamabad, April 04, 2019 – To celebrate the 243rd anniversary of American independence, the U.S. Embassy hosted Pakistani officials, businesspeople, civil society, celebrities, and friends for a celebration that included music, traditional American food, and simulated fireworks.  The evening’s guest of honor was Mr. Omar Ayub Khan, Federal Minister for Energy.  Under the theme of “Building a Vision,” speakers, photos, and video displays highlighted the common values underpinning U.S. and Pakistani friendship and the shared goals of the two countries.

In his remarks, Ambassador Paul Jones, Chargé d’Affaires, a.i., explained the choice of theme: “The theme for today’s Independence Day celebration is ‘Building a Vision.’  We wanted to tell the story of how our two great countries built our nations, our capitols, our embassies, and our relationship.  The story brings out parallels, from founding principles of our nations to our respective investments in iconic embassies in each other’s capitals.  We are very proud of this brand-new, beautiful embassy compound – one of the largest in the world – which speaks to the value and commitment we place on the relationship between our countries.”

During the official ceremony, the Embassy’s U.S. Marine Corps Detachment marched in the flag of the United States and choirs sang the U.S. and Pakistani national anthems. After the formalities, guests took part in traditional July 4th activities and ate food that Americans normally enjoy as part of their Independence Day celebrations.  For the evening’s featured entertainment, the United States Air Force Central Command’s band “Drop Zone” serenaded the guests with classic and modern rock and roll, country, and pop music, having flown to Pakistan from Doha to take part in the celebrations. 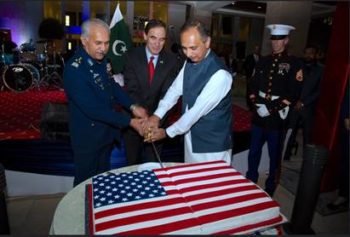