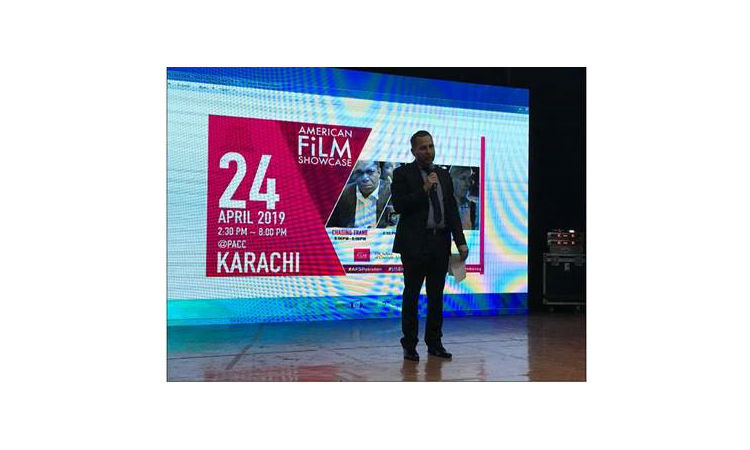 American and Pakistani filmmakers share ideas during the American Film Showcase in Karachi.

Islamabad, May 03, 2019 – From April 22-May 3, Pakistani and American filmmakers are taking part in the American Film Showcase, joining with industry-experts, university students, and the general public to discuss technical and thematic issues in film.  Discussions explore the various techniques of digital story telling.

The American Film Showcase features U.S. envoy Galen Knowles, one of the documentary filmmakers behind the award-winning film Far From Home.

In addition to the U.S. envoy’s public engagements, the showcase includes film screenings of several award-winning documentaries at theaters in Karachi, Lahore, and Islamabad/Rawalpindi, including: Heroes from the Storm, All American Family, Gadget Girls, Bias, and Chasing Trane: The John Coltrane Documentary.

The U.S. Mission to Pakistan teamed up with Pakistani NGO Stand for Peace to organize the American Film Showcase.  In a message to participants in the film screenings, Ambassador Paul Jones, Chargé d’Affaires, a.i., said: “By bringing together Pakistani and American filmmakers, we are partnering with the next generation of artists and filmmakers in Pakistan to develop new voices and tell new stories.”