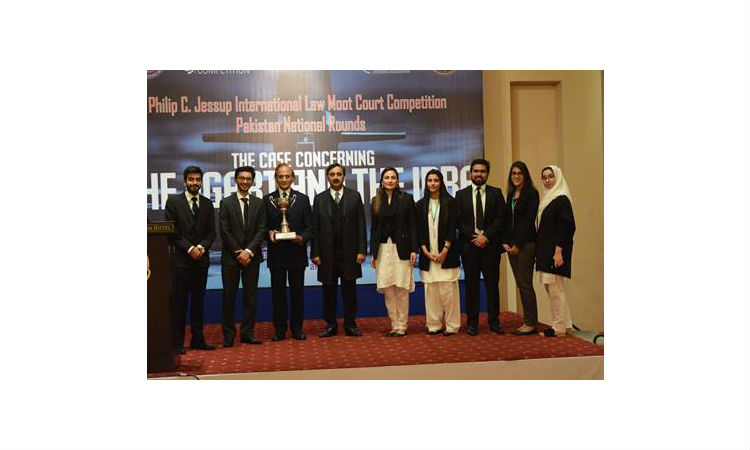 A group photo of the students from University College Lahore, who took the top prize at the U.S. Embassy-sponsored Philip C. Jessup International Law Moot Court Competition. On the right hand, judges listen to an argument during the competition.

The Pakistan College of Law Lahore team was named runner-up, and Quaid-i-Azam Law College Lahore finished third. The top three teams will travel to Washington, D.C. in April to compete in the finals against law students from 95 countries.

The 2017-2018 season marks the 59th year of the Jessup Competition and the third year that Pakistan has participated. This year, 117 Pakistanis from 21 law schools took part in a simulation of a fictional dispute between countries before the International Court of Justice, the judicial organ of the United Nations

With participants from over 645 law schools in 95 countries, the Jessup is the world’s largest moot court competition.

The four-day event was sponsored by the U.S Embassy’s Bureau of International Narcotics and Law Enforcement Affairs (INL) and the Office of Overseas Prosecutorial Development Assistance and Training (OPDAT).