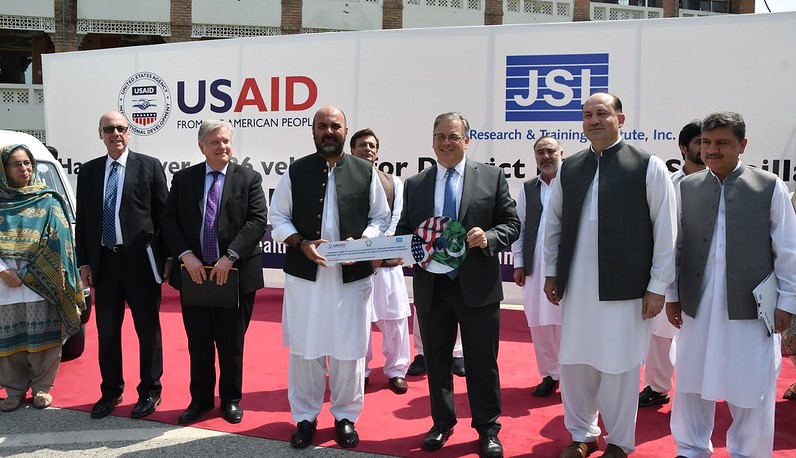 Peshawar – August 5, 2022 – U.S. Ambassador Donald Blome visited Khyber Pakhtunkhwa (KP) on August 3 and 4 to highlight the U.S. government’s extensive economic and development assistance, which has benefited the residents of Khyber Pakhtunkhwa over the past 75 years of bilateral relations.  During his trip, Ambassador Blome called upon Chief Minister Mahmood Khan and emphasized that the United States wishes to continue cooperation on economic development, commerce, educational partnerships, and investment that have helped the region and its people.

Ambassador Blome visited the Torkham border crossing to see first-hand how the border contributes to trade and economic activities in Khyber Pakhtunkhwa.  This included viewing the 46-kilometer Peshawar-Torkham Road, an $87 million U.S. government construction project which has reduced the cost of travel and vehicle maintenance by half, while facilitating commuters and traders each day.  While in KP, Ambassador Blome and USAID Mission Director Reed Aeschliman also handed over 36 vehicles to the Department of Health Khyber Pakhtunkhwa as part of U.S. government support for Pakistan to mitigate the COVID-19 pandemic and help rapid response teams collect COVID-19 samples and monitor cases.  This donation comes on the heels of a recent announcement in Washington to donate 16 million pediatric COVID-19 vaccination doses to Pakistan, which will bring total U.S. donations to over 77 million.  Ambassador Blome also visited the U.S. government-funded Burns and Plastic Surgery Center in Peshawar.  The cutting-edge health facility was constructed and equipped through $15 million in USAID funding.  The Center is the largest of its kind in Pakistan and has treated more than 5,000 patients since it opened in 2019.

While touring the state-of-the-art U.S.-Pakistan Center for Advanced Studies in Energy at the University of Engineering and Technology in Peshawar, Ambassador Blome stated: “It is an honor to be here today to see the Center and learn more about the great work that you are doing here.  As the United States and Pakistan commemorate our 75-year relationship this year, this facility symbolizes our shared vision and our enormous accomplishments.”  The U.S. government collaborated with engineering universities across Pakistan under USAID’s $127 million partnership to establish centers like this for advanced learning in the areas of water, energy, and food security.

During Ambassador Blome’s visit, the U.S. Embassy’s International Narcotics and Law Director Lori Antolinez participated in an inauguration ceremony for the KP Prosecution Academy, which was funded by the U.S. government.  In her remarks, Director Antolinez highlighted that the $2 million academy will train 200 prosecutors annually.  Since 1989 the U.S. government, through the State Department’s Bureau of International Narcotics and Law Enforcement, has provided $300 million to KP to promote economic and agricultural development, strengthen the justice system, and help promote security and stability.  This included building 1,240 km of roads in KP to help farmers and businesses get goods to market, completing 1,300 projects to provide drinking water and irrigation, and building 420 different law enforcement facilities, including local police stations.