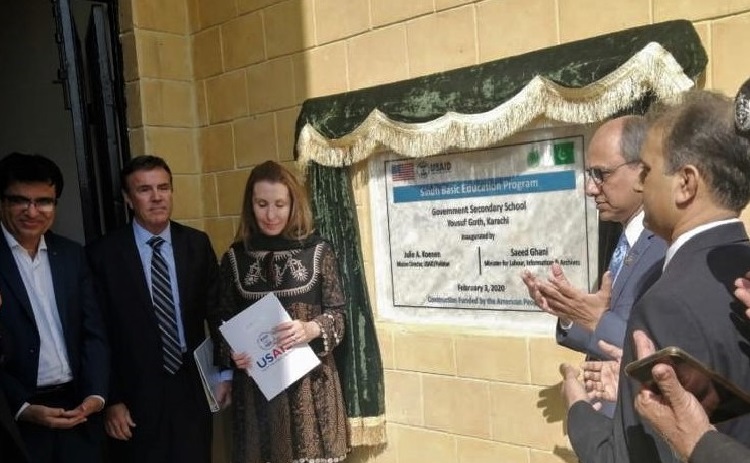 U.S. and the Sindh Government Open Another State-of-the-Art School in Karachi

Karachi – Local students in Karachi will have a new school for their education this year thanks to an on-going partnership between the United States Agency for International Development (USAID) and the Sindh government.

On Monday, USAID Mission Director Julie Koenen and Sindh Minister for Labor, Information and Archives, Saeed Ghani inaugurated the Yousuf Goth school in Gadap Town, Karachi. Starting in April, approximately 600 local students will study at this school and benefit from the modern classrooms and facilities.

“The partnership between the U.S. Government and Sindh has already resulted in improved quality of education in the province’s public schools,” Mission Director Koenen said. “The children in Sindh, who receive free education in state-of-the-art schools, will grow up to become the next generation of Pakistan’s engineers, doctors, teachers, and entrepreneurs.”

Minister Ghani expressed his appreciation for the U.S. Government’s strong support in modernizing education in Sindh and reiterated the province’s strong and ongoing partnership with USAID.

Sindh Secretary of Education Sindh Ahsan Ali Mangi, as well as other officials from Sindh and the U.S. Government participated in the ceremony along with community leaders, teachers, students, and parents.

This is the latest school built with the support of USAID’s 25 billion Pakistani rupee ($159.2 million) Sindh Basic Education Program (SBEP). The U.S. Government is supporting the construction of 112 modern school buildings in nine districts of Northern Sindh and five towns of Karachi.