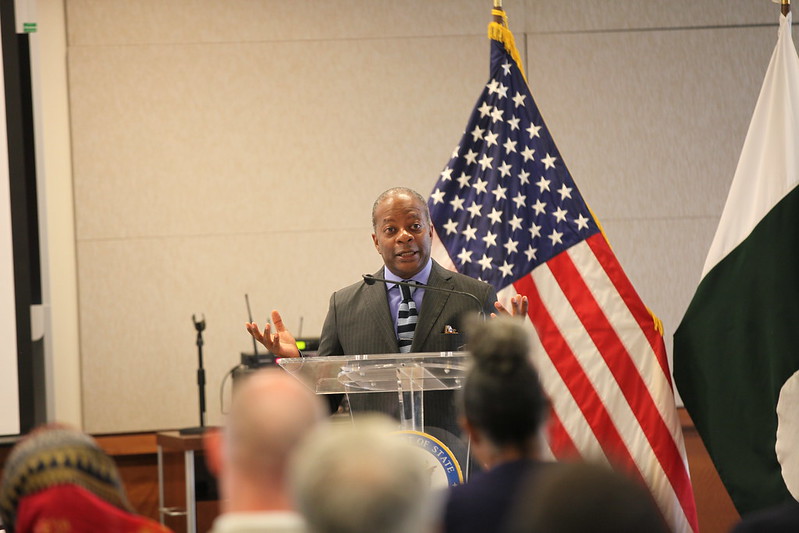 “On behalf of the U.S. Government, I thank UNDP and ANF for their efforts and partnership with INL on our common objectives of combatting drugs transiting through Pakistan and promoting the recruitment, retention, advancement, and gender mainstreaming of women police in Pakistan,” said Robinson.

The Assistant Secretary also attended a ceremony to celebrate the delivery of $1.44 million (295.7 million PKR) of commodities to the Excise, Taxation and Narcotics Control of Khyber Pakhtunkhwa, a KP provincial agency that has a drug interdiction mandate.  In his remarks, Robinson stated, “The fight against drugs and illicit contraband is a priority for Pakistan, the United States, and the international community, and I recognize that Pakistan faces special challenges because of its neighborhood. But when we work together, we achieve great things.”

On July 1, the Assistant Secretary joined Inspector General of Frontier Corps Khyber Pakhtunkhwa North Major General Adil Yamin, Inspector General of Frontier Corps Khyber Pakhtunkhwa South Major General Muhammad Munir Afsar, and senior Frontier Corps leadership for an inauguration and agreement signing ceremony for two joint projects worth approximately $10.5 million (2.1 billion PKR).  The inauguration celebrated completion of 45 new structures at FC KP North’s Warsak Training Center, including accommodation barracks for 500 men and 128 women, classrooms, and facilities for physical training.  Officials also signed an agreement for the construction of women’s facilities at eight existing FC KP South regional headquarters.  The U.S. government-funded project will provide barracks, dining halls, kitchens, and other facilities that will support stationing of up to 128 women Frontier Corps members at each location.  Regarding the women’s facilities, Robinson said, “The United States is pleased to partner with Pakistan to enhance opportunities for women to access justice and to participate in the administration of justice.”