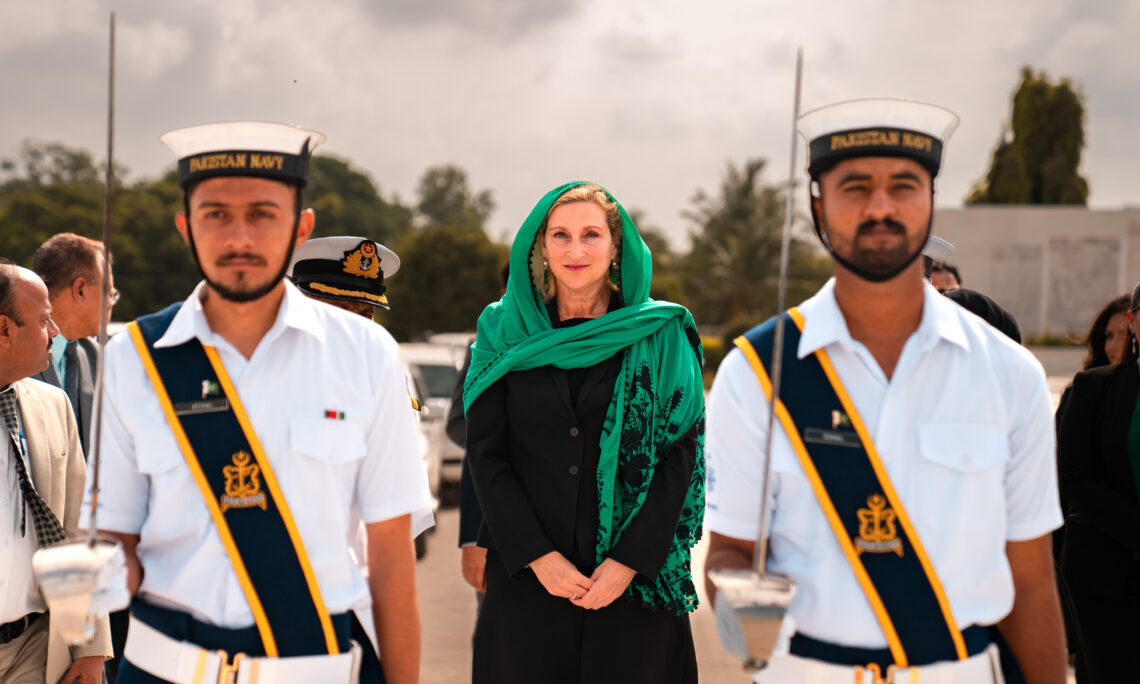 Karachi, Pakistan, September 1, 2022:  U.S. Consul General Karachi Nicole Theriot visited the Mausoleum of Quaid-e-Azam Muhammad Ali Jinnah and paid her respects to the founder of Pakistan.  Consul General Theriot laid a floral wreath at the Mausoleum and signed the guestbook on behalf of the people of the United States.

Consul General Nicole Theriot noted, “It is a great honor to be here at the Mazar-e-Quaid to pay my respects and commemorate the legacy of Muhammad Ali Jinnah.  The United States shares his vision of a unified, democratic Pakistan, one in which equality, social justice, and economic opportunity prevail.  These ideals gave rise to Pakistan’s creation, and they reflect values that we all hold dear.”

Consul General Nicole Theriot subsequently visited the tombs of Liaquat Ali Khan, Pakistan’s first Prime Minister, and Fatima Jinnah, Quaid-e-Azam’s sister.  She then visited the adjoining museum and greatly appreciated the artifacts related to the life of Quaid-e-Azam Muhammad Ali Jinnah.  Consul General Theriot remarked, “I am here to reaffirm the U.S. government’s commitment to further strengthening our economic ties, exploring ways to broaden our bilateral trade, boost investment, and help create conditions for expanded entrepreneurship and educational opportunities.  I look forward to working closely with the people of Sindh and Balochistan, and to strengthening our people-to-people, cultural, educational, and economic ties.”

The United States is deeply saddened by the devastating loss of life, livelihoods, and homes throughout Pakistan.  The American people remain steadfast in their support for flood-affected communities throughout Pakistan.  In the spirit of U.S.-Pakistan solidarity, the United States, through the U.S. Agency for International Development, announced on August 30 an additional $30 million in life-saving humanitarian assistance to support people and communities affected by severe flooding in Pakistan.  In addition to this $30 million in urgently needed humanitarian assistance, the United States also provided $1.1 million in grants and project support earlier in August to ensure direct assistance reaches those communities most impacted and to help mitigate and prevent the effects of future floods.