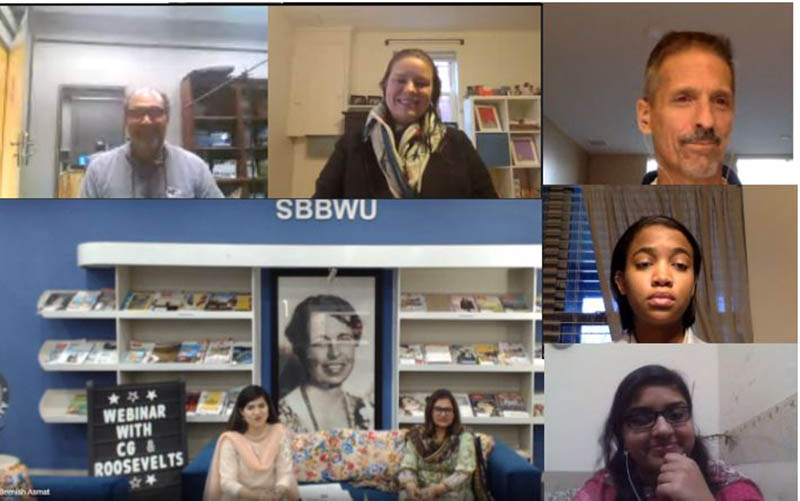 Peshawar – September 22 – The day after the International Day of Peace observances, the granddaughter and the great granddaughter of former U.S. President Franklin D. Roosevelt and first lady Eleanor Roosevelt held an interactive virtual chat with the students of Shaheed Benazir Bhutto Women’s University (SBBWU) in Peshawar.

The Vice Chancellor of SBBWU, Dr. Razia Sultana, thanked the participants and spoke about the only public sector women’s university in Peshawar and its partnership with ERCP. “It is a matter of privilege to be hosting an event to shed light on the life of the First Lady who advocated for the role of women in the workplace and played an instrumental role in the protection of human rights,” said Dr. Sultana on the occasion.

Ms. Anne and Ms. Tracy spoke about the legacy of the President and Mrs. Roosevelt and what they are doing to preserve it.  They noted that Mrs. Roosevelt became one of the most highly-regarded and well-respected First Ladies in the world.

Since its inception, the ERCP has helped tens of thousands of young women every year from across Khyber Pakhtunkhwa province to take advantage of print, online, and multimedia resources, and to connect with U.S. experts.