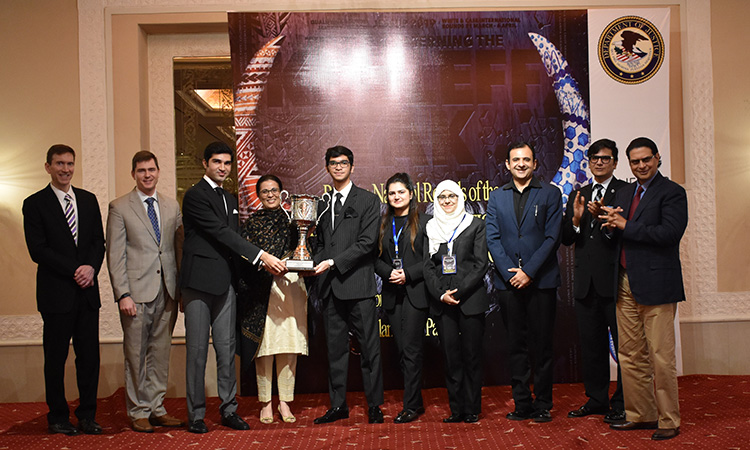 Winners of the Pakistan National Round of the 2019 Phillip C. Jessup International Law moot Court Competition received their trophy from Honorable Ayesha Malik, a Justice of the Lahore High Court. For high resolution photo see attachment.

From February 20-23, law students and legal practitioners from across Pakistan came to Islamabad for the Pakistan National Rounds of the 2019 Philip C. Jessup International Law Moot Court Competition, the world’s largest such competition.  The U.S. Mission in Pakistan sponsored the event, which attracted thirty-two teams from law schools throughout Pakistan.

This year’s competitors included, for the first time, two laws schools from Quetta and three all-girls teams from Islamabad, Peshawar and Lahore—all vying to represent Pakistan in next month’s international rounds in Washington, D.C., where teams from 100 countries will compete against one another.  Pakistan’s national competition constituted the second largest in the world this year.

Hundreds of Pakistani students and volunteers took part in the four-day event, where more than 70 matches were conducted in six mock courtrooms.  Over 80 volunteer judges, including five attorneys from the U.S. Mission, judged the matches, during which each team debated a complex set of issues of international law.

Presiding over the final arguments were the Honorable Ayesha Malik, a Justice of the Lahore High Court, and Salman Akram Raja and Khyzar Hussain, two prominent experts in international law.  Justice Malik and her colleagues on the final bench selected Indus College of Law (Hyderabad) as the winning team.  LUMS (Lahore), University College Lahore, and Kinnaird College for Women (Lahore) were the three runners-up.  The U.S. Embassy’s Overseas Prosecutorial Development, Assistance and Training section will be sponsoring the travel of all four teams to the international rounds in Washington D.C. in March.