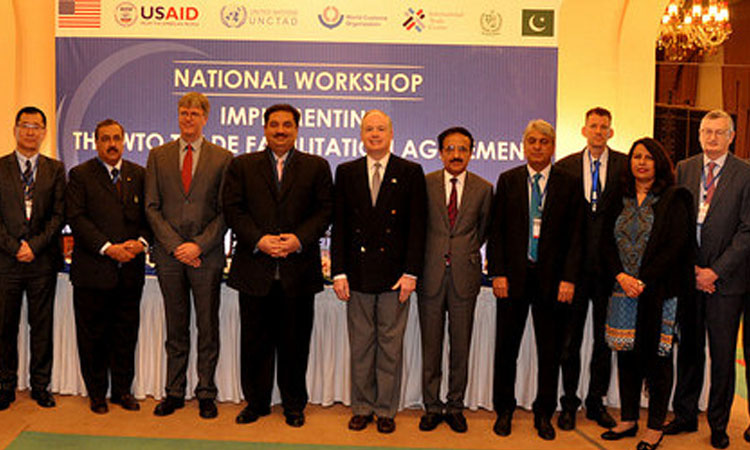 Islamabad, January 04, 2017: The U.S. is supporting the Ministry of Commerce with a training workshop on the Trade Facilitation Agreement in Islamabad. The U.S. Agency for International Development (USAID), through its Pakistan Regional Economic Integration Activity and Training for Pakistan Project, organized the workshop to raise awareness among public and private stakeholders on the Trade Facilitation Agreement and its impact on Pakistan’s trade competitiveness.

The three-day workshop was opened Jan. 4 by Minister for Commerce, Engr. Khurram Dastgir Khan and USAID Mission Director John Groarke and facilitated by trainers from the International Trade Center, the World Customs Organization, and the United Nations Conference on Trade and Development.  Participants include 70 representatives from government agencies, private sector associations, and private business and logistic operators.

The World Trade Organization member countries approved the Trade Facilitation Agreement in December 2013 at the 9th Ministerial Conference. This agreement has established a global framework for member countries to reduce the time and cost of cross-border transactions.

USAID is helping the participants identify trade regulations to which Pakistan is not yet compliant, and assisting in designing plans to meet the Trade Facilitation Agreement’s requirements. The training will ultimately help to improve Pakistan trade in international markets.

“Pakistan stands to benefit from the provisions of a newly adopted WTO Agreement on Trade Facilitation that could reduce the cost of trade and make Pakistani goods more competitive in a greater number of markets,” Groarke said in the opening session.

The Commerce Minister said continued support from international organizations will help Pakistan fulfill its obligations to the World Trade Organization. He said the agreement can benefit small and medium-sized enterprises in Pakistan by reducing trade costs and unnecessary border formalities.

The United States is the largest trading partner for Pakistan, with total bilateral trade volumes approximating USD 5 billion annually. It is also the leading export market where more than 14% of Pakistan’s annual exports now find a market, and it is my belief that there is potential to further enhance these trade volumes